TSPU Professor in one of the oldest university in Europe

Department of Slavic Studies of the Faculty of Philosophy, of one of the oldest Universities of Czech Republic as well as of Europe, Palacký University, Olomouc invited Valentina Egorovna Golovchiner Professor of Literature and Literature Teaching Methods of the Faculty of History and Philology of the Tomsk State Pedagogical University as part of the Erasmus + program for lecturing and conducting of seminars on topic "Permanent motives and variable meanings in the lyrics of V. Mayakovsky" and "Epic drama in Russian literature of the twentieth century."

The trip contributed to strengthening and development of close scientific cooperation of the Russian department with the Olomouc philologists, which was started in 2014. Valentina Yegorovna told about the increased attention...

TSPU REPRESENTATIVE IS A VISITING PROFESSOR OF CHINA UNIVERSITY

She was invited to China to test the software developed for study of Russian together with her Chinese colleagues and students.

Promotion of TSPU innovative developments abroad – is one of the highest priorities of department of international cooperation of TSPU.

Annual school of Russian language and culture for Japanese students took part in TSPU in seventh time. This year an interesting and diverse cultural and educational program was prepared, which included not only lessons, but also seminars, presentations, workshops, theater trainings, tasting of Russian cuisine, meetings with Tomsk students who are learning Japanese, dog sledding and much more.

Lessons of the Russian language as a foreign language and workshops were conducted by teachers of the history and philology faculty of the Tomsk State Pedagogical University. Support and organization of the School was undertaken by the employees of the Department of International Cooperation of TSPU. 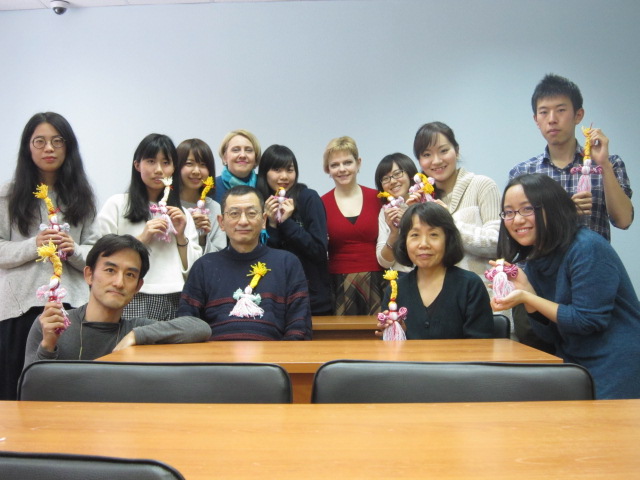 During three weeks (from 20 of February till 11 of march 2017) Japanese students under guidance of TSPU specialists will improve their skills in Russian language and find more about Tomsk, Russian culture, Russian history and customs.

On the final day of school there will be presentations and performance of Russian folk tale by Japanese students.

We invite you to visit this event, which...

Aykyan contest was created 16 years ago in order to encourage talented young people involved in various fields of activities. The ceremony took place on 24 of February 2017 in the Armenian National Academic Theatre of Opera and Ballet named after Alexander Spendiaryan. The awards were presented to prize-winners by the president of Armenia Serzh Sargsyan.

Student of the Tomsk state pedagogical university Valeria Anisimova has won a golden medal on the Russian sambo championship.

400 competitors from 52 regions of Russia had participate in the event that was held in town of Vyksa in Nizhny Novgorod area. One of the best results was shown by student of the Faculty of Sports and Physical culture – Valeria Anisimova, Master of Sports of Russia, repeated winner and participant of All-Russian and international competitions. She had won a golden medal in the category of 64 kg. According to results of these competitions the Russian team will be formed that will take participation in Europe and world championship.

Postgraduate student of TSPU Van Xinhua (China) has taken the second place on the All-Russian competition in Russian language for foreign students which was held at Ural state economical university on 21 of February 2017.

According to organizers, students from 67 universities from 50 different countries had taken part in the competition. This event was organized with the support of the “Russian world” Foundation to enhance the efficiency if language training and realization of creative potential of students.

Student of the Tomsk state pedagogical university has shown spectacular results and taken the second place by surpassing more than 200 competitors.

Specialists of the Russian Venture Company and the Association of Communicators in Education and Science compiled the list of the leading scientific and educational institutions of Russia regarding the quality of communication activities. On the basis of the analysis of open sources of objective parameters - such as the availability of the website, publications in mass media, management of social networks, the availability of specialized professionals or dedicated communication service etc., they have selected leading organizations in the field of communications from more than 1,500 universities and research institutes of Russia and TSPU was rightfully included in the list.

10-th Anniversary Regional scientific-practical conference of schoolchildren "I am studying nature", organized by the Centre for additional physical and mathematical and science education of Tomsk State Pedagogical University, was held within the walls of the university 12 February 2017.

The conference was attended by around 200 students from 1st to 11th grade from 32 educational institutions of Tomsk, Tomsk region and Kemerovo. This year, there was a  record-breaking number of sections - 14, the leaders of which were teachers of Tomsk State Pedagogical University, teachers of city schools, as well as assistants - students and undergraduates of TSPU, TPU, TUSUR, Siberian State Medical University. Schoolchildren made reports on different topics. It should be mentioned...