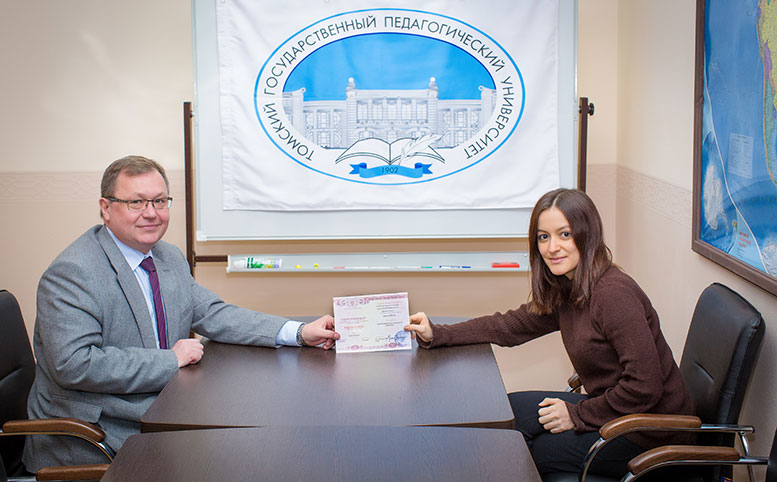 Paola Carolina Moreira Delgado has become the first student from Brazil who have passed testing in Russian as a foreign language at Tomsk state pedagogical university and received an official state certificate of proficiency in the Russian language. Paola has received the document from the Vice-Rector for International Affairs Konstantin Osetrin.

Paola came to Tomsk within the scope of an exchange program between the TSPU and the Federal University of Juiz de Fora in Brazil to study theoretical physics at the Physics and Mathematics Faculty of the TSPU. In addition to the exam in Russian she is preparing to exams in her main subject.

Paola is a very creative person; she sings and plays...

TSPU graduate has become a winner of the “first steps contest”

The final stage of city’s contest “First steps” took place on the 16th of May in the Palace of creativity of children and youth and according to the tradition TSPU has become a supporter of this event. 25 young teachers from elementary schools of Tomsk have become participants of the contest. We were happy to know that 4 out of 5 finalists of the contest were graduates of TSPU. The main objective of the contest is to increase prestige of teaching profession, to attract young specialist to schools in conditions of disastrous lack of pedagogical staff at schools.

The final tests included three competitions: "My professional discovery", "To children through creativity", "Solution of the pedagogical situations". In scope of the...

TSPU specialist at Center of Russian language in Mongolia

Administrator of preparation department of Tomsk state pedagogical University Kosheleva Elena Urevna has visited Center for Russian language in town of Ulaangom (Mongolia, province of Uvs) to conduct lessons of Russian language. This visit was due to the fruitful cooperation of the TSPU and the Administration of the Tomsk region.

Several groups of students willing to learn Russian were formed on the basis of the Center - junior and senior schoolchildren, officials of the professional supervision department.

In addition to educational events, a meeting with the governor of the province, Mr. Batsaikhan was held. He expressed the hope that the teachers of Russian language from the Tomsk State Pedagogical University will be able to teach regularly at the Russian Language...

Grand opening of the VI Forum of pedagogical universities “In Tomsk”

The program of the forum will give children an opportunity to become the part of the strongest Structure of student government in the country, as well as to participate in a number of educational and cultural events, to adopt experience from the students of TSPU and invited guests.

Students of Tomsk State Pedagogical University have prepared a great number of unprecedented number of interesting and useful events.

The second space lesson in the history of Russia will take place on 17 may 2017 within the framework of scientific forum U-NOVUS 2017. Master of Physico-mathematical Faculty Rustam Kononenko and Associate Professor of General Physics Arzhanik A. R. will conduct a lesson "Electromagnetic human habitat" including many experiments. The culmination of the meeting will be a conversation with cosmonauts of the International Space Station (ISS) Fedor Yurchikhin and Oleg Novitsky. In the framework of the Space lesson, students from various regions of Russia will learn about the inventions of Russian scientists and their role in studying the theory of the electromagnetic field.

During the U-NOVUS lesson ISS cosmonauts Fedor Yurchikhin and Oleg Novitsky via satellite linkup will...

21 April 2017 «Enactus TSPU» team that was composed from students-members of TSPU business incubator has taken the first place on the regional stage of «Enactus Russia». Now our ream is going to participate in the All-Russian stage of the competition that is taking place in the end of May.

Enactus is the largest international non-profit organization that unites students, business leaders and universities. Enactus teams develop and implement their own projects aimed at improving the level and quality of people lives.

Enactus projects are considered to be successful only if their results could be measured. At the same time, students get serious practical experience in implementing their own projects.

Each year the winners...

The VI All-Russian forum of student self-government among pedagogical universities “In Tomsk” will be held between 11 and 14 of May at Tomsk State Pedagogical University. Each year starting with 2012 the forum unites hundreds of student activists willing to improve their skills in different areas. The year  will not be an exception: the forum will be attended by students from 15 pedagogical universities of Russia, including Blagoveshchensk, Krasnoyarsk, Tyumen, Barnaul, Biysk, Ufa, Omsk, Tomsk, Cheboksary, Kemerovo, Novokuznetsk, Novosibirsk, Yekaterinburg, Moscow , Perm.

The program of the Forum is developed and implemented by students of TSPU - activists of the strongest Structure of student government in the country. The intensive four-day work is organized...

The Russian Sambo Championship among students took place on April 26, 2017 in Dzerzhinsk, Nizhny Novgorod region. Tomsk State Pedagogical University was represented by Valeria Anisimova, first-year student of the Faculty of Physical Culture and Sports, member of the Russian national team, master of sports of Russia. On the first day of the competition Valeria showed a convincing performance, climbed to the second step of the pedestal and won the silver of the championship.

All in all about 250 sportsmen from 65 higher educational institutions have participated in the event.

Student teak of Tomsk state pedagogical university has shown spectacular results during the All-Russian competition on educational robotics and methods of its teaching, that for the first time took place between 18-20 of April in South Ural State Humanitarian Pedagogical University (Chelyabinsk city).

Our team has successfully dealt with all the tasks and was awarded with third place diploma for digital educational resources.

In "Solution of pedagogical tasks" contest, that requires real-time compilation of a technological map and conduction of a lesson on educational robotics on the basis of educational institutions in Chelyabinsk, the lesson of TSPU student team was recognized as the best and awarded with the highest...

All-Russian educational conference “Knowledge. Technology. Trends in tourism industry in Russian Federation” took place 20-21 of April in Yalta and gathered representatives of government authorities, leading experts of the tourism industry, as well as employees of educational and scientific organizations of the country.

Tomsk State Pedagogical University was marked as an educational institution showing outstanding results in training of specialist in tourism sphere.

In addition to the main events – the discussion of the topic "Development of domestic and incoming tourism in the Russian Federation (2019-2025)", visiting various sections where participants studied modern trends in state educational policy, as well as a classification system for hotels etc. – 11...