The 46 annual book fair was taking place in London between 14 and 16 of March. Representatives from 130 countries have participated in this event.

The Russian Federation was represented by a joint stand of the Institute of Translation and the Presidential Center of B. N. Yeltsin, at which the leading Russian fiction and children's literature was presented, as well as by the stand of the Russian Academy of Natural History with scientific literature.

Among the catalogs of scientific and educational methodical literature awarded with the Diplomas "For the best publication in the industry" from the "The Gold Fund of National Science" series, there was a translation manual written by Tomsk scientists Lyudmila Petrochenko, Candidate of Philology, Professor of the... 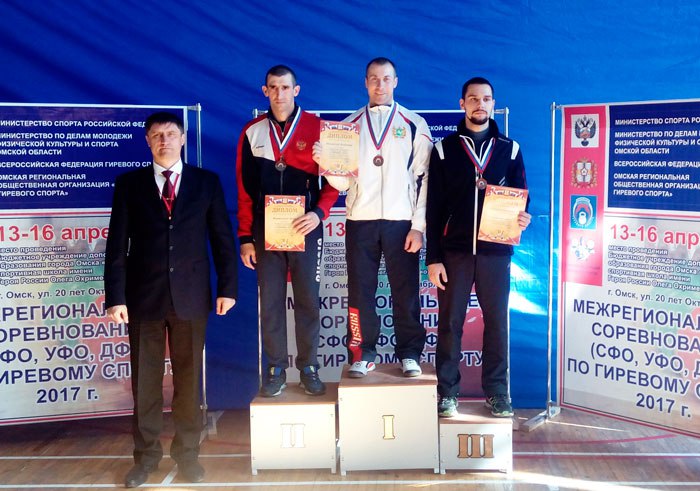 The interregional semifinal of the Russian championship in kettlebell lifting took place in Omsk. Vladimir Polyansky, senior lecturer of the TSPU Department of Sports Disciplines and Higher Sports Skill, won a gold medal on the very first day of the competition.

TSPU STUDENT HAS WON THE SIBERIAN COMPETITION OF STUDENTS’ SQUADS

Svetlana Popova, student of the faculty of elementary and pre-school education, the member of Student pedagogical squad (SPS) “Danko” has become the best member of SPS in Siberian federal district.

The competition took place at Altai state pedagogical university and involved students from Tomsk, Novosibirsk, Omsk regions, Transbaikal, Altai, Krasnoyarsk territories. By the results of the competition the embodiment of professional leadership and the best student of the Student Pedagogical squads of the Siberian Federal District became a student of the TSPU Svetlana Popova. As she said during the awarding ceremony: "This victory for me is a new experience and personal growth. I'm not going to stop there. I will go further, I will improve and assert myself. My main goal is...

Jesse Kera (Vancouver Universitu, Canada), the president and executive director of center for English study «Socrates» has conducted the workshop "Self-realization of personality: from idea to implementation" at TSPU. It was an interuniversity event that was attended by students and teachers of TSPU, TSU, TPU, as well as exchange students from China. At the lecture hall, the issues of self-determination of personality, psychotypical behavior were raise and the need for live communication, life style, organization of personal space, personal time management, and much more was supported and justified. The lecture took place in an informal atmosphere, the focus was made on situational thinking through the use of gaming technology and discussion methods.

Cosmonautics Day at TSPU was celebrated with “space lesson”

“Space lesson” took place on the 12 of April at the Tomsk State Pedagogical University and this time the event was dedicated to one of the most important events in the history of Russia – Cosmonautics Day. It was the day when humanity overcame new limits and made a great discovery by sending man in open space for the first time.

At the "Space lesson" schoolchildren together with their teachers-curators have discussed issues that subsequently will be addressed to cosmonauts who are working at ISS. For example how long person gets used to the conditions of weightlessness, what cosmonauts do on the ISS (their work and leisure), what studies are conducted in space and whether they change their outlook on life, laws Physics. The...

Professors V. E. Golovchiner and A. N. Koshechko (department of literature and literature teachings methods) had given lectures for students of philological faculty of Palacký University within the framework of academic exchange program of Erasmus+ .

The philological faculty of Palacký University is one of the constant international partners of TSPU. The academic exchange not only allows teachers to conduct lessons in Russian culture and literature of XIX-XX centuries but also to undergo on-the-job training in one of the leading universities of Europe.

A memorial plaque was installed on the main building of Tomsk State Pedagogical University to honor am outstanding teacher-innovator Grigori Abramovich Psakhe.

The event was hosted by the rector of TSPU Valery Vladimirovich Obukhov: "Dear friends! On behalf of the staff of Tomsk State Pedagogical University, I congratulate you on such a wonderful event! On the initiative of the Academic Council of the TSPU, we had unanimously approached the mayor's office of Tomsk with the request to open a memorial plaque in memory of our remarkable graduate. We respect Grigory Abramovich and we are proud of his achievements. This was one of the brightest and most authoritative of our graduates and the number of people that came here today once again highlights the importance of Grigory...

TSPU GRADUATE IS A TEACHER OF THE YEAR 2017

Graduate of TSPU faculty of Foreign languages Jana Vladimirovna Monich became the winner of the Regional contest “Teacher of the year - 2017”. The awarding ceremony was held on 3 of April at the Tomsk theatre for young people. All in all 19 teachers from Tomsk region had took part in the regional stage of the contest. Pro-rector for teaching and methodical work and continuing education Marina Petrovna Voitekhovskaya had congratulated participants of the contest and awarded the five of the finalists with special prizes of the student and public jury of TSPU. Yana Vladimirovna Monich not only won hearts of students and teachers of TSPU, but also of the members of the Grand Jury, who had chosen her to became the "Teacher of 2017".

Postgraduate student of the faculty of preschool and elementary education of TSPU Julia Nikolaevna Gudkova has shown great results in the International contest of teaching skills «Silver morin khuur» that was taken place in Ulan Bator.

Participants of the contest included teachers of the Ulan-Bator branch of the Russian economics university named after G.V. Plekhanov, as well as from schools of the Embassy of the Russian Federation, the Joint Mongolian-Russian School located in Ulan Bator, teachers from the Republic of Buryatia, the Irkutsk and Tomsk regions and the city of Kaliningrad.

Together with other eleven contestants, Julia Gudkova had passed three tests: "Teacher’s business card ", "Lesson" and "Debate." Each stage...

The employees of the Physics and Mathematics Faculty of Tomsk State Pedagogical University will organize the All-Russian Scientific and Practical Conference "Psychodiadactics of Mathematical Education: Planning the Modern Educational Results in School and University", which will be held at the University on March 23, 2017. The event will be held with the support of the Tomsk Regional Institute for Advanced Studies and Retraining of Education Workers, Information and Methodological Center of Tomsk.

About one hundred participants from Moscow, Barnaul, Bryansk, Pskov, Tomsk, Voronezh, Ulan-Ude and other Russian cities will present their reports within the framework of the plenary meeting of the conference and the work of two sections: "Implementation of the Concept for the...