Students of the TSPU Faculty of Physical Education and Sports Maxim Tolkachev and Sergei Lytnev represented Tomsk region at national competitions in ski racing among the students. The event took place between 15 and 23 January 2017 in Zainsk, Republic of Tatarstan.

During the first day of competition Maxim Tolkachev, a student of Tomsk State Pedagogical University, Master of Sports of Russia, had won the bronze medal by taking over his rivals in the classic style 10 km race.

On the second day of the event TSPU Lytnev Sergei, who is also a master of sports of Russia, had shown spectacular results. Sergei took the third place and won the bronze medal in the free style 10 km race.

Besides the event’s program...

TSPU invites to the annual international conference "Science and Education"

On 17-21 April 2017 the XXI International Conference of students, graduate students and young scientists "Science and Education" will be held at the Tomsk State Pedagogical University

Workshops will be organized in the following areas:

The project of the Tomsk State Pedagogical University "Gauge fields, supersymmetry and gravity" was included in the winners list of research projects made by groups of research centers and scientific laboratories of educational institutions of higher education under the Ministry of Education and Science of the Russian Federation.

444 projects of 125 organizations were selected from around 2500 applications. Scientific developments, entered in a list of the best will be supported within the governmental program in 2017.

18 educational institutions of the Siberian Federal District received Support from the federal budget. Tomsk will receive funds for the implementation of activities in the fields of chemistry, physics, biology, history and information security,...

The team of the Tomsk State Pedagogical University "Ekosovest" is among the three winners of "sort with us" environmental quest that took place among the universities in the country from October to December 2016.

There were 70 teams from universities from all over the Russia among the participants of the environmental quest "Sort with us ". Expert commission has announced winners of the competition. The main criterion - the successful introduction of the separate collection of waste at the university, which was also the main purpose of the environmental quest. According to the experts the team of Tomsk State Pedagogical University "Ekosovest" was included in the top three winner list! Now our guys will travel to Moscow, were summing-up of the project will be held, as well as...

Tomsk Mayor Ivan Klein awarded athletes and trainers who showed the best achievements of the year. Students  of the Tomsk State Pedagogical University traditionally show a high level of sports training! By results of 2016, which were summarized by the head of the city, the awards were given to Maxim Tolkachev, a student of the Faculty of Physical Education, who participated in national competitions, the Championship of Russia and Championship of the Siberia Federal District in ski racing, where he took the third place. "We are really proud of your accomplishments, and by winning medals at Russian and international competitions, you are not only replenishing the treasury of their own...

TSPU GOT A QUALITY CERTIFICATE

In December 2016 Tomsk State Pedagogical University has been certified for compliance with the requirements of All Union State standard ISO 9001-2015 (ISO 9001: 2015) within the framework of a voluntary certification system "International Center of Standardization and Certification ISCO» (Dubna) .

As a result of audit and management evaluation Tomsk State Pedagogical University has received a qualification certificate, which approves that TSPU  satisfies the requirements of GOST R ISO 9001-2015 (ISO 9001: 2015). 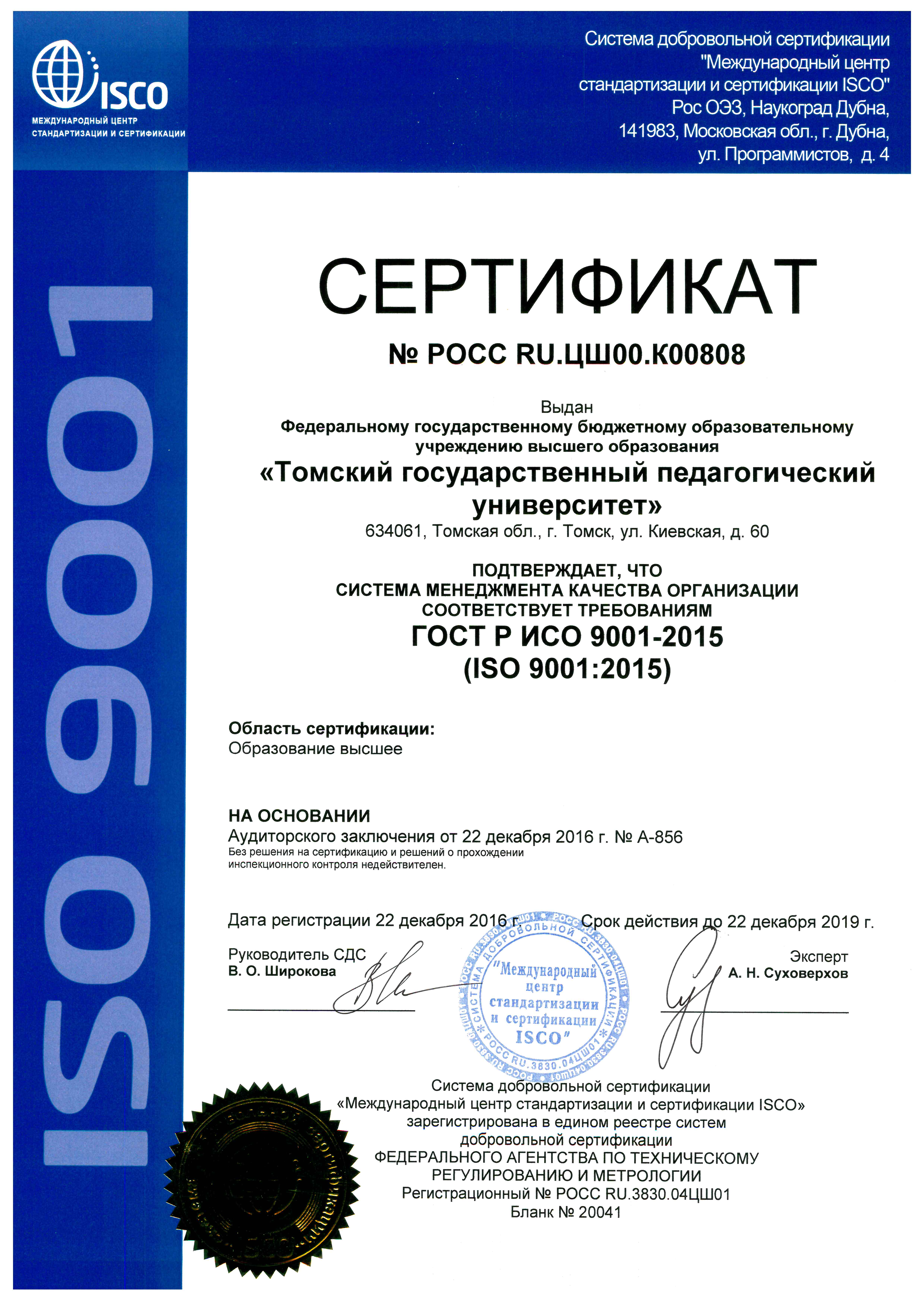 December 24 at the "Emerald City" shopping mall the rewarding of participants and winners of the regional ecological competition "Christmas bag" was held. The organizers of competition were students of the Faculty of Economics and Management of the Tomsk State Pedagogical University.

Awarding was held in the format of an interactive exhibition: there were the works of the participants - craftworks from waste materials, two workshops on making Christmas toys by...

PROSPECTS OF STUDY RUSSIAN AS A FOREIGN LANGUAGE AT TSPU

December 26 at the conference hall of the Tomsk State Pedagogical University’s Scientific Library the V International scientific seminar "Teaching Russian as a foreign language: theory and practice" was held. The event brought together about 30 participants and more than 50 listeners, including students, undergraduates of TSPU faculty of history and philology.

This seminar is a result of many years of fruitful cooperation between the Department of language theory and methods of teaching Russian of Tomsk State Pedagogical University and "Russian-Polish Institute" Foundation (Wroclaw, Poland). However, this year two Chinese universities have joined the seminar. Mudanjiang Pedagogical University became co-organizer of the seminar, and the delegation of the Heilongjiang...

TSPU is actively involved in international cooperation between Russia, Brazil and China. Within the scope of visit of Chinese delegation from Mudanjiang pedagogical university the department of international cooperation of Tomsk State Pedagogical University together with faculty of Mathematics and Physics has conducted a trilateral teleconference between TSPU, China representatives and representatives of Juiz de For a University (Brazil) dedicated to physical and mathematical education in these countries as well as to discussions of realization of mutual projects in Physics, IT and education. This event was covered in Brazil press:

Students of the Faculty of Economics and Management of Tomsk State Pedagogical University once again showed excellent results within the framework of the All-Russian contest "Crystal Orange". According to the results of the regional stage of the project, which were announced on December 12, 2016, two projects of Tomsk State Pedagogical University have earned victory and prizes. Ecological project "Christmas string bag", which purpose is to create a sense of environmental responsibility among the Tomsk citizens through creative activities (creating art objects from waste materials), won in the category "Public relations, advertising and media technology in the field of ecology”.