The project by Tomsk State Pedagogical University “Sibege” was mentioned in the analytical report made by Higher School of Economics, dedicated to online-services for school students in Russia.

The program developed by specialists of TSPU allows pupils to get a free online-preparation for Unified State Examination in Math, Physics and English. The lessons are conducted by students from various faculties of the University as well as by teachers of Center for additional physico-mathematical and natural education of TSPU.

“Free services (as online-courses Sibege) attract children from low-income families that can not afford private tutors. Representatives of such category among the users of free services can estimates up to 40% ” – says the website of Higher...

TSPU EMPLOYEE HAS RECEIVED AN AWARD FROM TOMSK GOVERNOR

On the eve of Russian science day, on 7 February the governor of Tomsk region Sergey Zhvachkin has congratulated newly elected academicians, corresponding members of Russian Academy of Sciences and awarded a number of scientists.

Larisa Germanovna Smyshliaeva, doctor of pedagogical sciences, associate professor, director of  Psychology and pedagogy institute of TSPY had received decoration for “The service in educational sphere”.

“Once again I sincerely congratulate newly elected academicians and  corresponding members of Russian Academy of  Sciences as well as entire scientific community of Tomsk with the well-deserved recognition of our scientist! Today we have 46 academicians in Tomsk”, – said Sergey Zhvachkin.

On the last week the results of the fifth competition of academic and scientific literature, published in 2015/2016 – “Golden coryphaeus”, were summed up by the committee from Russian and Kazakh universities. 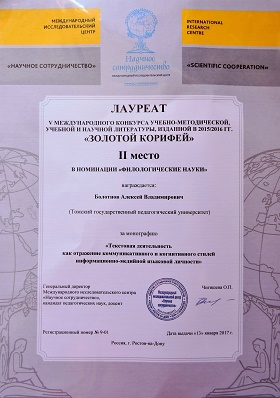 On February the 1st Tomsk students and pupils went on the air with International space station during the first «Space lesson» which was held in Tomsk Palace of youth art.

Students of the faculty of economics and management of TSPU (advertisement and public relations direction) have participated in the opening ceremony of the Year of ecology in Tomsk region, which took place on 27 January  2017. The event was hosted by vice- governor for agro-industrial policy and nature management Andrey Knorr.

The program included summing up the results of the last three years as well as awarding of public and commercial initiatives in nature protection. Among such initiatives the environmental projects of TSPU students were noted. In 2015 TSPU students had implemented a socially important ecological project  «Art-chaos. Garbage wind» in which more than 300 Tomsk citizens took part. In 2016 they realized another...

Diploma of the European scientific and industrial chamber (Diploma di Merito) and a medal for exceptional professional achievements were given to Oleg Polishchuk Hemovichu, the professor of TSPU, Doctor of Chemistry, professor of department for Chemistry and methods of Chemistry teaching of Chemistry and Chemical Biology Faculty of TSPU. Diploma and Medal of the European scientific and industrial chamber are given to honored workers of science, education and culture. These awards, as claimed by the founders, gives a number of privileges, including the requirement to provide help and support by officials, and can be used both for domestic use and in traveling abroad.

The "Space Lesson" project starts in Tomsk with participation of specialists of Tomsk State Pedagogical University.

On 1st of February school students will have an opportunity to communicate with the astronauts of the ISS. The transmission will provided by "Tomsk" TV together with specialists from the Mission Control Center.

The cost of the full course: 8500 rubles (stage payment available). There are discounts for students and staff of TSPU!

Upon completion of the course participants will receive a certificate confirming knowledge of the language.

During the lessons we use modern techniques, materials, video and audio courses that make learning process interesting and varied.

To enroll, you must fill in the online form:

Students of the TSPU Faculty of Physical Education and Sports Maxim Tolkachev and Sergei Lytnev represented Tomsk region at national competitions in ski racing among the students. The event took place between 15 and 23 January 2017 in Zainsk, Republic of Tatarstan.

During the first day of competition Maxim Tolkachev, a student of Tomsk State Pedagogical University, Master of Sports of Russia, had won the bronze medal by taking over his rivals in the classic style 10 km race.

On the second day of the event TSPU Lytnev Sergei, who is also a master of sports of Russia, had shown spectacular results. Sergei took the third place and won the bronze medal in the free style 10 km race.

Besides the event’s program...

TSPU invites to the annual international conference "Science and Education"

On 17-21 April 2017 the XXI International Conference of students, graduate students and young scientists "Science and Education" will be held at the Tomsk State Pedagogical University

Workshops will be organized in the following areas: