RUN-THROUGH OF TV PROJECT «BE READY» AT TSPU

Municipal stage of the regional children's sports TV project "Be Ready" is completed. The project is conducted by State TV and Radio Broadcasting Company "Tomsk", with the support of the regional administration. The regional stage level is ahaed and it will be attended by 6 strongest teams in the Tomsk region, who showed the best results. According to the draw, in representatives of Zyryansky, Kargasoksky and Asino areas will compete in the first semi-final and citizens of Teguldetsky, Kolpashevo and Tomsk regions – in the second semifinal. And the day before in TSPU sports complex a dress rehearsal for the TV project was held. According to the tradition the students of the Faculty of Physical Education and Sport tried to cope with the tasks of the relay. 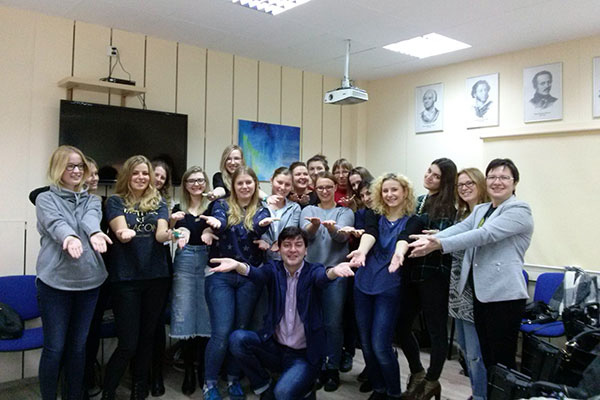 According to the existing tradition, the employees of the Tomsk state pedagogical university have organized Siberian Days at Russian center of Wroclaw university 24-26 of October. Our colleagues have shown presentations «Siberia – crossroad of destinies», «Myths about Siberia», «Tomsk and Tomsk universities», «National dress of Siberian people». Associate professor of Tomsk state pedagogical university Artem Kollegov read a lecture on stereotypes and autostereotypes ended with discussion during which the polish youth talked about stereotypes spread in Poland. TPSU postgraduate student  Marina Metlyaeva has organized workshop dedicated to Siberian folklore. Participants had an opportunity not...

Practical tasks included economical analysis and estimation of logistic processes of oil and gas and mineral and raw materials enterprises.

Region autumn math school with the participation of professor Andrei Raygorodsky will take place at the Tomsk state pedagogical university on 1-6 of November. The goal of the event is to prepare school students to the Unified state examination in math, but do this not in the usual way but in the format of open lectures and task analysis.

On the first of November there will be a grand opening of math school hosted by director of center for additional physico-mathematical education Michael Alexandrovich Chervonny. Analysis of tasks with parameters, bank tasks of examination and geometry tasks will be held between 1 and 5 of November. Lectures will be conducted by associate professor of general math department of TSU Yuri Koshelsky, associate professor of math development...

Faculty of technology and entrepreneurship of TSPU invites to exhibition-contest «Siberian folk crafts» which takes place on 22-23 November within the scope of VI International theoretical and practical conference “Professional education. Problems and achievements.”

The main objective of the event is to draw attention to decorative and applied arts and folk crafts of Siberia in sphere of modern artistic and technological education and craft and enterprising activities. You can find details regarding the contest as well as application form in the regulation.

THE FIRST QUALIFYING STAGE OF MATH CONTEST AMONG SCHOOLCHILDREN AT TSPU

The first qualifying stage of All-Siberian open math contest for schoolchildren took place at TSPU on 23 October 2016. Last year TSPU Center for additional physico-mathematical and natural-science education officially became platform for this event in Tomsk and hosted competition in physics. Now Tomsk school students had an opportunity to join competition in math. More than 120 have tested their knowledge in this exact science. The results of the competition will be available on the official web-site of the event.

Soon comes yet another competition: the first qualifying stage in physics that will take place on 13 November 2016 at the first building of TSPU (75 Komsomolsky prospect). In order to participate one should register on the official web-site (

Tomsk state pedagogical university became a partner of the All-Russian historical and educational forum «Parade of epochs», which took place in Tomsk last weekend. This event is carried out throughout Russia and aimed at development and support of student educational projects. Within the scope of the forum students from 45 subjects of Russian Federation have visited practical lessons on development and realization of initiatives in studying of historical and cultural heritage of Russia. They also have participated in quizzes, talk shows and conferences with invited experts. Students have exchanged their experience with each other, goy new ideas during the debates, presentations, games. Students from several faculties of TSPU have provided sufficient help in organization of...