WORLD CHAMPION AND OTHER VICTORIES: SUCCESSES OF TSPU STUDENTS AT THE WORLD FLIPPER CHAMPIONSHIP 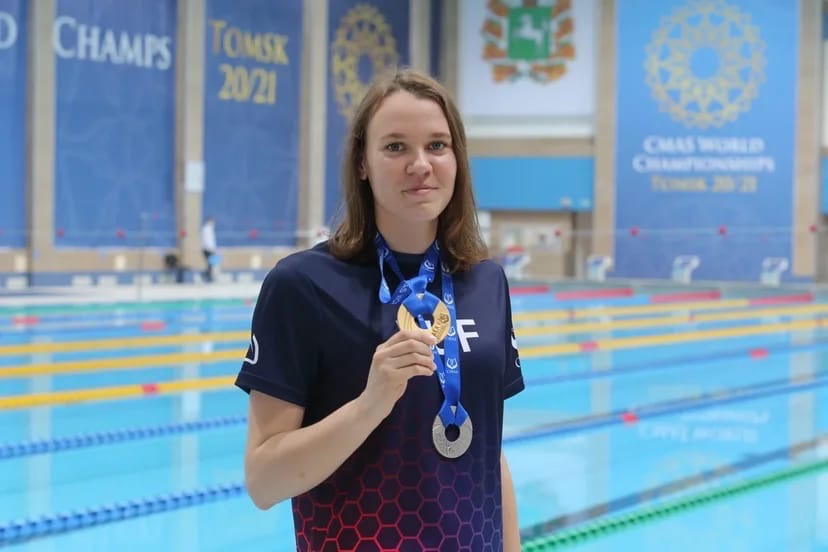 The World Championship in underwater swimming has been held in Tomsk. Alexandra Skurlatova, a student of the fifth year of the Faculty of Physical Culture and Sport of the Tomsk State Pedagogical University, won the victory places and prizes, set European and Russian records, and also became the world champion as a member of the women's national team.

Alexandra Skurlatova was a member of the Russian national team which took part in the World Flipper Championship. Our team showed good results by winning gold in the medal standings and women's (with Alexandra's participation) and men's teams became world champions. In addition, our student won first place in the 4x100 individual distance relay and second place in the 4x50 relay setting the European and Russian records.

Her main rivals were the Chinese and Ukrainian teams. According to the athlete, there are very strong diving schools in these countries. However, despite the good preparation of the competitors, our team managed to win. And no wonder, because our athletes are trained since childhood, including Alexandra: when she was six years old, coaches of the pool "Victory" highly appreciated her potential. The student has been perfecting her skills there for 18 years under the keen guidance of her coaches Grigory Shumkov and Alexander Demjanovich. Alexandra has been preparing for the world competition for two years: originally the tournament was to be held in 2020, but it was postponed because of the pandemic:

"Preparations and expectations stretched over a long period of time, which is why these two training seasons were very difficult, but I think we together with the coaches have done well and showed how strong we can be", — says the athlete.

According to Alexandra, to perform "at home" is very pleasant and exciting at the same time: on the one hand, you feel the strong support of your loved ones and on the other - you worry about how to perform at your best.

Following the results of the championship, the athlete was selected for the World Games to be held next year in America. At that event, the girl will represent the Russian national team in two disciplines: 4x100 relay and 100m individual medley in the fins.

Besides such a great sport event, Alexandra participated in international students competitions representing the Tomsk State Pedagogical University and won the silver medal at 50m diving.

No less important performances as a member of the Russian national underwater sports team are ahead of Alexandra, that's why the preparation is already in full swing.