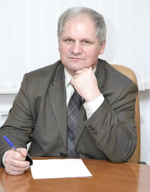 The head of the scientific school of theoretical physicists specialized in the research of classification problems in gravity theory. Valery Oukhov assisted to the development  of the principles of classifications of spatio-temporal manifolds  according to the presence of specified sets of Killing's fields. Important classification problems for Stackel, conformally-stackel and homogeneous spaces for general theory of relativity (both in the presence of substance and in vacuum, as well as for alternative gravitation theories (including theories with a dilatopic field) have been set and solved. As a result a new scientific school on the verge of gravity and mathematical physics was created.

Articles in the leading foreign journals (J. Math Phys., Journal of Phys., Phys. Lett., and others) are regularly quoted by the specialists in the field of gravitation and mathematical physics.
A visiting professor of the universities of Barcelona (Spain), Cali (Colombia), Pembroke (USA); a member of the American Mathematical Society; Honorary Professor of the University of North Carolina in Pembroke (USA); a full member of the International Pedagogical Academy.

Obukhov is heading the project on improvement of personnel potential of understaffed rural schools of Tomsk region jointly with the Department of General Education of Tomsk region. The concept of the program is creating of  administrative-pedagogical teams which are able to solve actual problems that an understaffed rural school has. The results were highly evaluated by pedagogical teams and schools involved in this project and the project itself got a support of the Department of State Policy of the RF Ministry of Education and Science.

Editor-in-chief of the scientific journal “TSPU Bulletin”, which is included in the list of leading peer-reviewed journals of Higher Attestation Commission.

Member of Organizing Committees of a number of national and international scientific conferences.

Since 1996 - till present – head of the researchers’ group working on RFBR grant in Mathematics. Executor of RFBR grants in Physics, programme “Universities of Russia” and presidential programme of support of the leading scientific schools of Russia.

Head of the grant of federal scientific-technical programme “Priority Lines of Science and Technology”, two scientific projects “Education Development”, one of which is currently being implemented.

2009 – head of the grant “Scientific and Methodical Support of Content Improvement and Development of Educational Programmes of Additional Education of Ungraded Rural School Teachers under the сonditions of Introducing Federal Educational Standard of New Generation” of departmental target program "Development of the Scientific Potential of Higher Education (2009-2010)."

Other statuses and awards:

The total number of publications is 120, 4 of them are monographs.