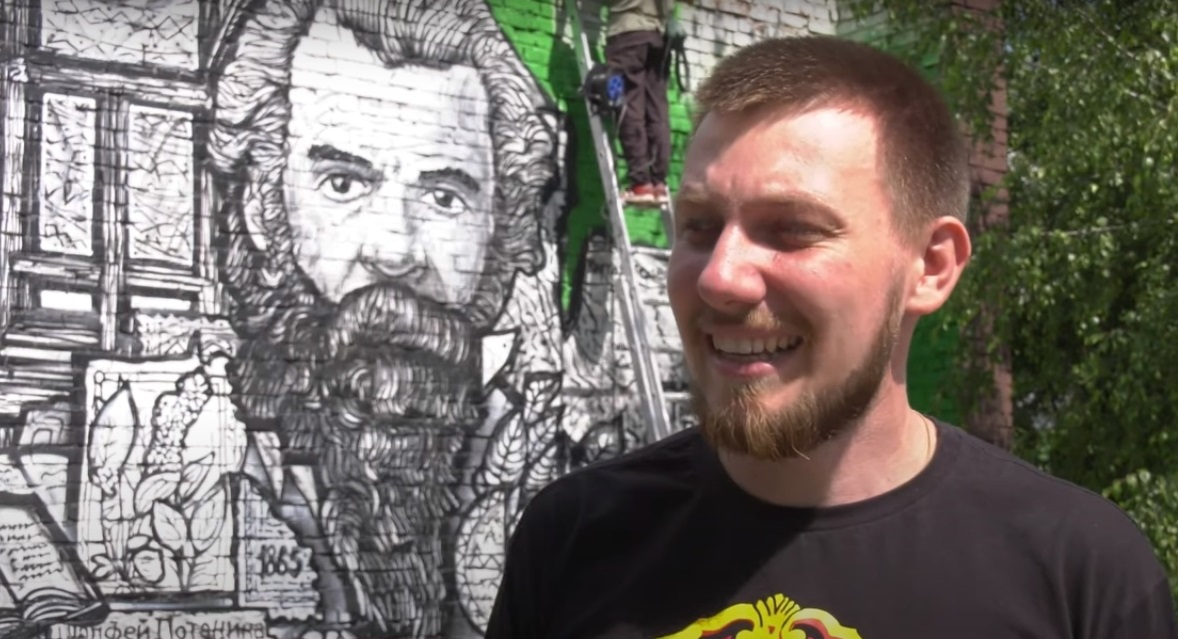 "Tomsk is the people" is an art and educational project aimed at preserving and increasing the historical memory of outstanding Tomsk residents. Modern portraits of famous personalities appear on Tomsk buildings with brief information to introduce the figure. The second season of the project started with graffiti of Grigory Potanin. The author of the initiative - Konstantin Cherenkov, a history teacher and graduate of the Tomsk State Pedagogical University's Faculty of History and Philology.

The campaign to spread historical knowledge and improve the city began in the summer of 2020 with a portrait of Ivan Yuryevich Moskvitin, a Tomsk Cossack and Russian explorer. Today, the house at 4th Bering Street (Gymnasium No. 26) was decorated with an image of the Russian geographer, ethnographer, public figure Grigory Nikolaevich Potanin.

"I just knew that the portrait of the grandfather of Siberia will appear in Tomsk and we did it, — says Konstantin. — Potanin was a legendary citizen of Tomsk: he was a scientist, a politician, the first honorary citizen of Siberia, the creator of symbols of Siberia..."

The author is convinced that history and aesthetics should become a standard for Tomsk residents, and culture should go from the suburbs to the center. In order to involve residents of the city in the project, people's voting was started: citizens could choose whose portraits will decorate city streets, which famous personalities will be known in Siberia. Around 600 people took part in the poll, images of the three winners will appear in Tomsk in the second season of the project. The first three places, according to residents, went to G. N. Potanin, Maria Leontievna Bochkareva, one of the first Russian female officers and creator of the first female battalion in Russian army history, and Sergei Alexandrovich Belov, basketball player, 1972 Olympic champion, and two-time world champion.

"The portrait of Bochkareva is to be painted on the building of school number 40 on Nikitina street, and that of Belov on Zonalnaya Station," — said the author.

The second season of the program is supported by the Department of Youth Policy, Physical Culture and Sports of Tomsk Oblast, whose grant in the regional competition of youth projects "Your Idea" the project of the THPU graduate won last December, coming first in the category "Patriotism and Citizenship".

"There were many projects in the competition, but Konstantin's initiative seemed the most interesting, — comments Kirill Antonov, Deputy Head of the Department, Chairman of the Youth Policy Committee. — Properly made murals and graffiti - is, firstly, a way to improve the level of local history knowledge: not every Tomsk resident knows who, for example, Grigory Potanin was, what role he played in our city. And secondly, it is a decoration of the city".

Kirill Maksimovich expressed confidence that modern heroes may appear on Tomsk buildings as well: for instance, thousands of medics, who fight coronavirus infection every day. In the future, seven more images of famous personalities will also appear on city buildings, including the portraits of Georgy Mokeevich Markov, Hero of Socialist Labour, the elder Fedor Kuzmich, the Russian commander, the participant of World War I and the Civil War Anatoly Nikolayevich Pepelyaev, and others.