THE TSPU WILL REPRESENT TOMSK AT THE SEMI-FINALS OF THE ALL-RUSSIAN COMPETITION “TEACHER OF THE FUTURE. STUDENTS" 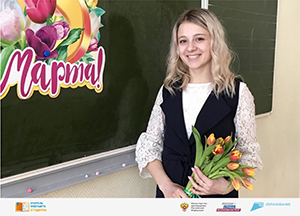 The first online stage of the All-Russian professional competition "Teacher of the Future" has finished: 15 students of the TSPU are one step closer to victory!

10,000+ students from all over the country passed a three-level testing: functional literacy assessment based on the methods of international comparative studies of education quality (TIMSS, PISA, ICILS, PIRLS, ICCS), a general cultural test and a subject test (according to the chosen specialization). Only 600 contestants who scored the highest points were invited to the interregional semifinals: the Siberian and Far Eastern Federal Districts will be presented by 100 future teachers, including 15 students from the Tomsk State Pedagogical University, and a total of 19 candidates will go to the semifinals from Tomsk.

The most difficult tests are still ahead, but, according to our participants, even the first round was not as easy as expected:

“In each of the three tests there were some difficulties, but the more interesting it was to complete the assignments, — said the semi-finalist Alena Fazleeva, a student at the Institute of Childhood. — Regardless of the result, it is important for me to test myself, try my hand and gain experience in participating in a professional competition".

There is no doubt that only the most fearless students of Russia have registered to participate in the large-scale test of professional skills. Although some students had doubts at this stage, the personal goals and prospects that await the contestants afterward helped them to decide:

“Registration was the most difficult stage: it was quite difficult to decide whether to participate in such a serious competition, since you need to have a significant base of competencies and self-confidence. On the other hand, such events allow you to reveal your weak points and correct mistakes in time. Therefore, I decided to take a chance, — says Ilya Trofimov, a student of the Faculty of History and Philology. — During the first stage of the competition the test for functional literacy turned out to be expectedly difficult, where it was especially difficult to solve problems with mathematical formulas: this is beyond the competence of humanities students. In general, participation in the final course of study will allow you to test yourself, your capabilities, to make sure you worth as a teacher and, perhaps, to discover in yourself something that you have never seen or felt before".