TSPU STUDENT WON THE GOLD MEDAL AT THE SAMBO CHAMPIONSHIP

The Sambo Championship of the Siberian Federal District has ended in Novosibirsk. As usual, Valeria Anisimova, a student of the Faculty of Physical Culture and Sports of the TSPU, showed high sports results.

Valeria, the Master of Sports of Russia of International Class in sambo, left her rivals no chance and brought the team of the Tomsk region a gold medal in the weight category of 65 kg. However, it is no time to relax. As coach Denis Vyshegorodtsev said, more serious competitions await the athlete ahead: 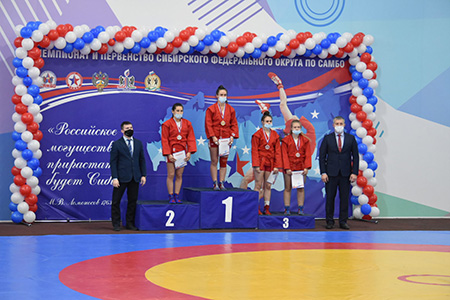 “This start was very important for the girls (another participant from the Tomsk region became the winner in the weight category of 59 kg). It may seem that their level has long outgrown the level of the Siberian Federal District championship, but it is not true: in Siberia, there is traditionally a very strong competition among women, plus because of the pandemic we had a long break in competitive activity. The victory in Novosibirsk, of course, will boost our confidence, because Valeria will have to compete at the World Cup in Moscow on December 17".

For four days of the championship, in which 765 athletes from 10 subjects of Siberia took part, the sambists of the Tomsk region managed to win 13 medals. Participants of the female team demonstrated professionalism and became the third in the team placing.