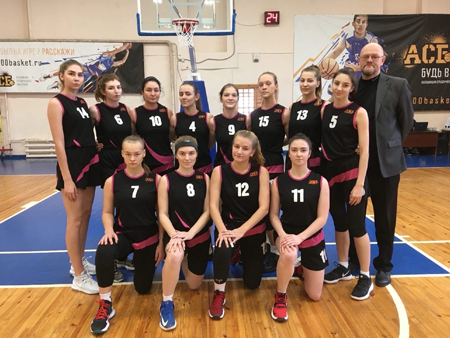 For a month now, basketball players of the Tomsk State Pedagogical University have been undergoing tests of the Championship of the Russian Student Basketball Association (Siberia top division) of the 2020-2021 season. Guys have completed two intense tours, the first of which took place at the home arena — at TSPU, and the second one — on the basis of the Kemerovo State University.

In the first round, our women's team defeated the team of Tomsk Polytechnic University. Daria Kaftina was recognized as the best player of the match with 25 points. The men's team also shown great results: the guys beat their opponents from the Tomsk State University of Architecture and Building. Vladislav Petelin was the best player, a fourth-year student of the Faculty of Physical Culture and Sports.

The women's team will certently remember the second round of the competition, organized in the sports hall of the Kuzbass State University for it was marked by three intense games. However, the confident attitude of the rivals did not prevent our basketball players from taking two victories: the girls beat the team of Novosibirsk State Technical University with a score of 52:46 and defeated opponents from the Kuzbass State University with a score of 64:46. The best player of the match was Snezhana Suvorova, a third-year student of the Faculty of Physical Culture and Sports. The men's team defeated the team of the Kemerovo State University (87:66).

The athletes brought these victories to Tomsk. The teams and their coach, associate professor of the TSPU Oleg Valerievich Smirnov are going to have a period of weekly preparation for the next round, which will be held in Novosibirsk.