TSPU AT THE INTERNATIONAL SCIENTIFIC AND PRACTICAL FORUM "LESSONS OF NURNBERG" 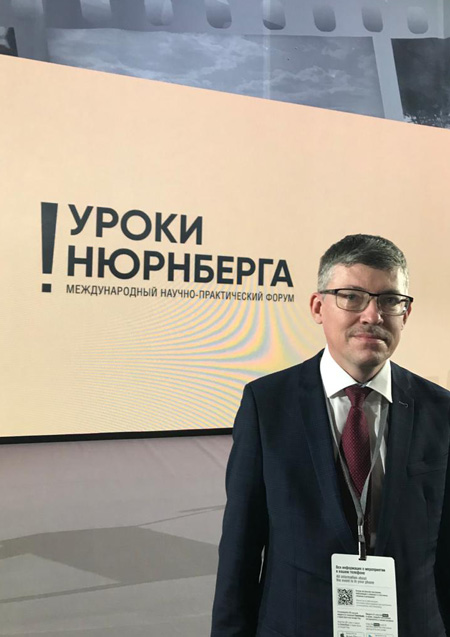 Rector of the Tomsk State Pedagogical University A. N. Makarenko and Vice-Rector for Youth Policy and Educational Work D. B. Nasonov took part in the International Scientific and Practical Forum "Lessons of Nuremberg", that was held the Victory Museum on Poklonnaya Hill. The large-scale event became one of the key events of the Year of Memory and Glory: it was timed to the 75th anniversary of the beginning of the Nuremberg trials over Nazi criminals. The goal of the project is to show that Nazism did not have a "bright" side: civilians of the occupied territories were subjected to massive genocide by the invaders. As a result of punitive operations and other actions in the occupied territory of the USSR, 11.5 million people were killed, whose only fault was that they were Soviet citizens and lived on lands subject to the "merciless Germanization" according to the "Generalplan Ost".

At the opening of the forum, Russian President Vladimir Putin addressed the participants online: "The duty of the entire world community is to guard the decisions of the Nuremberg process: its principles underlie the post-war world order"

“Behind the mass terror, bloody massacres, slavery and the purposeful extermination of entire peoples were standing concrete organizers - the top leadership of Nazi Germany. And the states that were subjected to aggression, millions of people who went through inhuman trials, torment and suffering, rightly counted on retribution, on the inevitable, public punishment of criminals”, — said Putin.

The main goal of the forum was to develop a consolidated position in assessing Nazi crimes as genocide of the Soviet people: for two days, participants discussed the historical experience and judicial practice of the Nuremberg Military Tribunal and subsequent trials of war criminals. The submitted archival documents on the policy of genocide, some of which can be found in the "Electronic Library of Historical Documents", helped to form a unified assessment of Nazi crimes, Within the framework of the forum the rector of TSPU presented the project "Unaccounted losses of the civilian population of the USSR in the rear territories as a consequence of the Nazi genocide during the Great Patriotic War." It will become an integral part of the All-Russian patriotic project "Map of Victory" and will be presented at the site "Crimes of the Nazis against the Soviet people as a subject of research, teaching and methodological, educational and educational activities".

The relevance of the topic for a pedagogical university is beyond doubt: the training of a modern teacher is one of the important state tasks aimed at shaping future generations of Russia as a powerful, independent and sovereign country. For modern Russia, the preservation of the historical memory of the Great Patriotic War is not only a subject of scientific and journalistic interest, but also an element of ideology necessary for further national development.