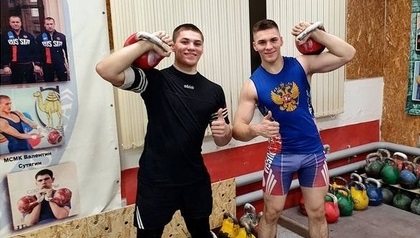 The world championship in kettlebell lifting had ended in St. Petersburg. Brothers Dmitry and Ivan Cherkashin, students of the Faculty of Physical Culture and Sports of the TSPU, showed the best results.

On the first day of the prestigious competition, Dmitry confidently won the status of world champion in the classic double-event. In the 85 kg category, the athlete showed the following results: jerk - 148, snatch - 195, total - 245.5. The strongest athlete of the world championship among juniors in the 85 kg category was Ivan, who took gold by making 83 lifts.

In addition to participating in individual competitions, the students became part of the first Russian team, which managed to take the honorable second place in the long cycle.

A total of 250 athletes from 12 countries took part in the competition. The tournaments were held in St. Petersburgl on the basis of the sports complex "Nova Arena". According to the requirement of Rospotrebnadzor, the event was organized without live audience, but online broadcast was provided.