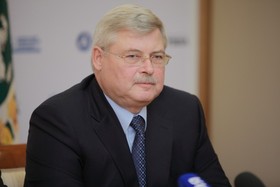 “I am glad that the the young leader had joined the ranks of the Tomsk rectors' team. Andrei Nikolayevich is no stranger both for Tomsk and for the pedagogical university and I am sure that he will quickly get used to his position, - said Governor Sergey Zhvachkin and then he joked - Especially with such a pedagogical surname" (Anton Semyonovich Makarenko was a Russian and Soviet educator, social worker and writer, the most influential educational theorist in the Soviet Union who promoted democratic ideas and principles in educational theory and practice).

Sergey Zhvachkin noted that the new rector and the university as a whole are faced with the difficult task of ensuring the professional continuity of generations in schools.

“Thanks to the state policy, the prestige of the teaching profession has grown significantly - both the increase in salaries and the construction of new institutions played a role. Well, who else can train the best personnel for the education sector, if not the first pedagogical university in Siberia?” - said the governor of the Tomsk region Sergey Zhvachkin.

He wished the new rector to push the university forward, to protect the traditions of the Tomsk Teachers' Institute, established in 1902 at the behest of Emperor Nicholas II.The head of the region also thanked Valery Obukhov, who had headed the university since 2000, for his great contribution to the development of the TSPU, expressed confidence in further cooperation and asked him to provide the necessary assistance to his successor.