TSPU center for additional physico-mathematical and natural-science education invites schoolchildren, students, teachers and for all comers to participate in popular science lecture “What is worth to catch in science and what one can catch there” which takes place on the 11th of October at 16.00.

During the lecture you will find out:

The meeting was held in form of a quiz on “Election to State Duma of Tomsk region”, that was organized by Elena Anatolievna together with the representatives of Tomsk municipal election committee (Romanova K. A.) and teachers of Civil Law department of TSPU (Head of department Kindyashova A. S., senior teacher Choibsoniva C. B.).

In the course of the quiz students have not only showed their knowledge and interest in the coming... 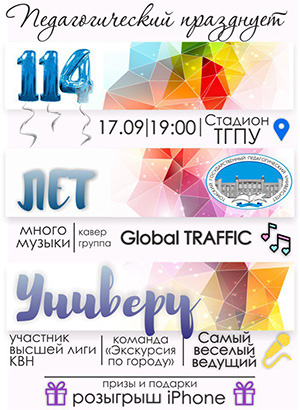 Students and employees of Tomsk state pedagogical university are going to mark a significant date – 114 anniversary of the University on Saturday the 17th. Festive events will begin at 19.00 and according to the tradition will be held on the territory of TSPU stadium (62A Kievskaya Street). The program will include numbers by comedians, musicians and activists. There also will be some competitions, gifts and of course colorful fireworks.

Two student teams of TSPU have participated in the second sport garbage collection championship that took place in Lagernyi garden in Tomsk. The goal of the action is to clean the city after the celebration of Tomsk citizen day. Together with the colleagues from other educational institutions TSPU students have picked more than 500 kg of garbage. As representatives of nature department noted the half of the collected garbage consisted of plastic and glass bottles. The student of TSPU, head of “Point of view” voluntary group Kseniya Zobnina has received a special prize for a “selfless approach to the task”. All the participants have received souvenirs.

The awarding of winners of All-Russian competition of students' projects in the field of public relations, advertising and media technologies will take place in October in Moscow.

By the decision of the jury in the “Ecology” category the work by students of Tomsk State Pedagogical University “ART-CHAOS. Garbage wind." has received  the highest award. According to the authors the goal of the project is to change attitude to garbage through the creation of art-objects and make schoolchildren more environmental responsible.

"In Tomsk there are some measures taken to improve the environmental situation and federal and regional projects are being implemented: "Garbage has its house", "Tomsk - clean city!", "Batteries, Surrender! ". But in our opinion -...

Postgraduate students of economic theory department of Tomsk state pedagogical university (Head of the Chair prof. V.V. Sizov) participated in field meeting of geographical society committee on tourism development, which was taking place from 8 to 10 September in Tomsk. The topic of meeting was: “The role of geographical society in development of tourism in Siberian federal district: problems and prospects”.

Postgraduate student Galina Panukova (group 61 of “Tourism” course) has presented a project of Ivan Petlin’s expedition from Tomsk to China. The goal of the project was to develop a tourist route timed to 400 anniversary of diplomatic relations between Russia and China. The project was approved by Kotlyakov Vladimir Mikhailovich – chairman of Russian...

Every year TSPU students participate in city events. This autumn on September 10-11 students of the Tomsk state pedagogical university join to the celebration of one of the brightest events of the year – Tomsk citizen day. The festive events will begin with dance number : TSPU students along with their collegues from other universitues at 12.00 on Voskresenskaya hill  will dance to the song called “Tomsk is what we are”. After the official opening of Tomsk citizen day the “University parade” will begin. Our students holding TSPU banners in their hands will proudly march down from to Lenin Square in a huge column of Tomsk students and then down to Novosobornaya square. TSPU activists will carry the University flag across the city and perform anthem of their...

For the third year running students of the Tomsk state pedagogical university are heading Tomsk region team in annual all-Russian military game “Zarniza”. Traditionally the youth from various organizations and educational institutions of Russia gathers in Chita, the administrative center of trans-Baikal region. During one week competitors from 21 city of Russia have participated in six stages of the game: “Training center”, “Rescuer”, “Courage! Honor!", " Quick march" and “Special mission”. This year, the representative of TSPU center of patriotic education Artem Fedoseenko has shown great results during “Zarniza 2016”. He took the first place in “PARACHUTE” stage of military and patriotic games!

Around one thousand of first-year students from Russia and abroad have started their student life at TSPU on the first of September. Traditionally a new academic year has started with a vast cultural program. Festive events have begun with dean greetings and performances by each of the ten faculties: first-year students have received answers on their questions as well as information on the key points if the education process, gotten to know supervisors that will help students to familiarize themselves with TSPU environment.

In scope of the festive events Valeri Vladimirovich Obukhov has congratulated students along with the representatives of regional and municipal administration: deputy governor of Tomsk region for domestic policy...

Please accept our congratulations on one of the major holidays of the Tomsk region - the Knowledge Day!

We begin the new academic year with excellent results. The passing score has increased In Tomsk universities. For the first time our kindergartens have met the1st of September without queues.  As for the system of vocational education, we are opening a new Centre for Applied qualifications for IT-and radio electronics. And at the end of the year a new school will appear in the Green Hills district of Tomsk - the first school in 25 years that will be opened in the regional center.